On January 29, 2019, the Agency for Healthcare Research and Quality (AHRQ) released a report showing the changes in the incidences of hospital-acquired conditions (HACs) from 2014 to 2017. The good news, and the headline, is that overall, HACs have declined by 13% in that period. According to AHRQ, 20,500 lives have been saved in that period, along with $7.7 billion in avoidable healthcare costs. (The report can be found here: https://www.ahrq.gov/sites/default/files/wysiwyg/professionals/quality-patient-safety/pfp/hacreport-2019.pdf.)

Clearly the value-based purchasing incentives initiated by the Centers for Medicare & Medicaid Services (CMS) prior to 2010 and adjusted over the years are having their intended affect. As an example, earlier this decade we used to discuss that close to 100,000 deaths were reported each year from hospital-acquired infections (HAIs) alone. A few years ago, the estimate was closer to 80,000 annual deaths, and is continuing to trend down.

The good news (great news, actually), is that all of the hard work put in by hospital staff and the medical industry is moving things in the right direction and saving lives. The fact that the movement began based on monetary values rather than human values of savings lives can be debated, but the impact cannot. 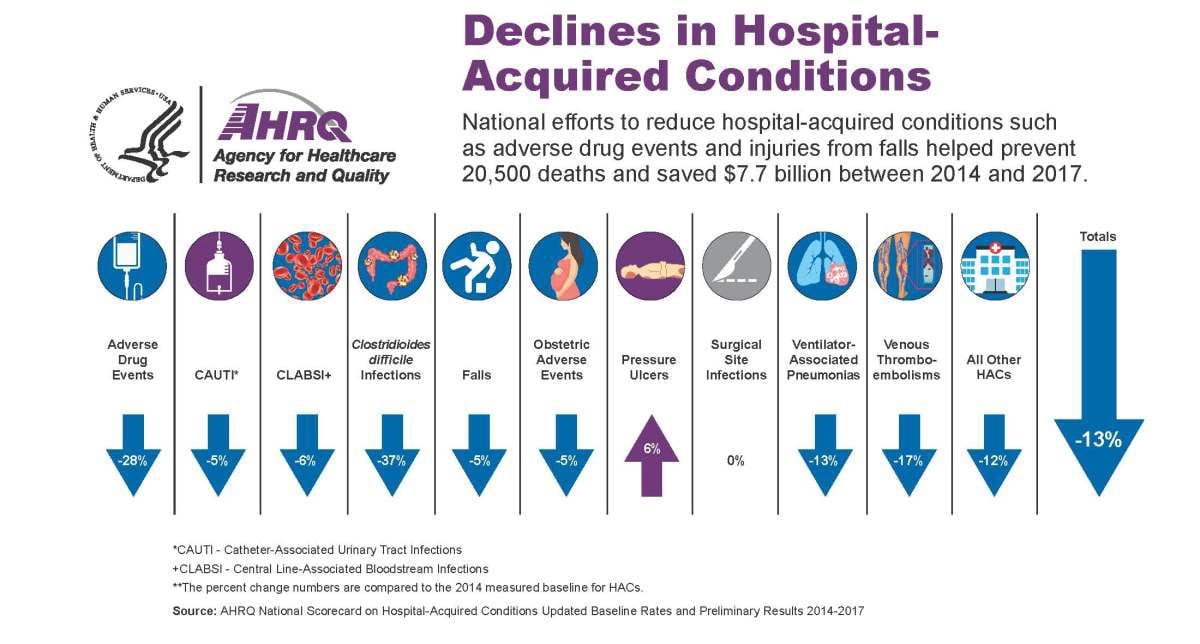 The bad news, however, is that there is still much work to be done. The percentage declines in HACs are impressive, but the incidence rates are still very high. For instance, the last time AHRQ released a similar report (in 2016), the 2014 incidence rate was 99 HACs per 1,000 hospital discharges and equated to approximately 2,940,000 HACs among all hospital inpatients 18 years old and over. The data reported in this year's report put that rate estimated at 86 HACs per 1,000 discharges for 2017, or approximately 2,550,000 HACs.

Also concerning is that two HAC categories did not decline at all over the past four years - Surgical Site Infections and Pressure Ulcers. Surgical Site Infections (SSIs) had not declined at all since 2014, despite the intentions of targeted safety initiatives such as SCIP (Surgical Care Improvement Project) and CMS' value-based purchasing incentives.

Pressure Ulcers, now commonly also referred to as PIs (Pressure Injuries), actually rose in incidence during that period by approximately 6%. In 2014, the rate was at 21.8 per 1,000 discharges, or approximately 647,000 PIs. In 2017, the rate went up to 23.0 per 1,000 discharges. More importantly, AHRQ estimates that an additional 4,900 people died from hospital-acquired PIs during this period. The only HAC to impact more patients was Adverse Drug Events (24.2 per 1,000 discharges), mainly medication errors. (Those two HACs alone accounted for about 55% of all HAC events in 2017 data. Wow.)

Joe Przepiorka
Joe Przepiorka is the Vice President of Marketing for Encompass Group. He can be reached at joe.przepiorka@encompassgroup.net

Medical patients often want to know what’s happening to their bodies, how they’re being cared for, and how they can..

At Encompass, we believe that everyone should feel safe and comfortable in today’s healthcare environments. This is..

The Center for Disease Control (CDC) estimates that more than one in ten patients develop a pressure injury. This is..

The Evolution of Pressure Injury...

Patients and their caregivers have struggled with the affliction of pressure injuries throughout the millennia. Even..